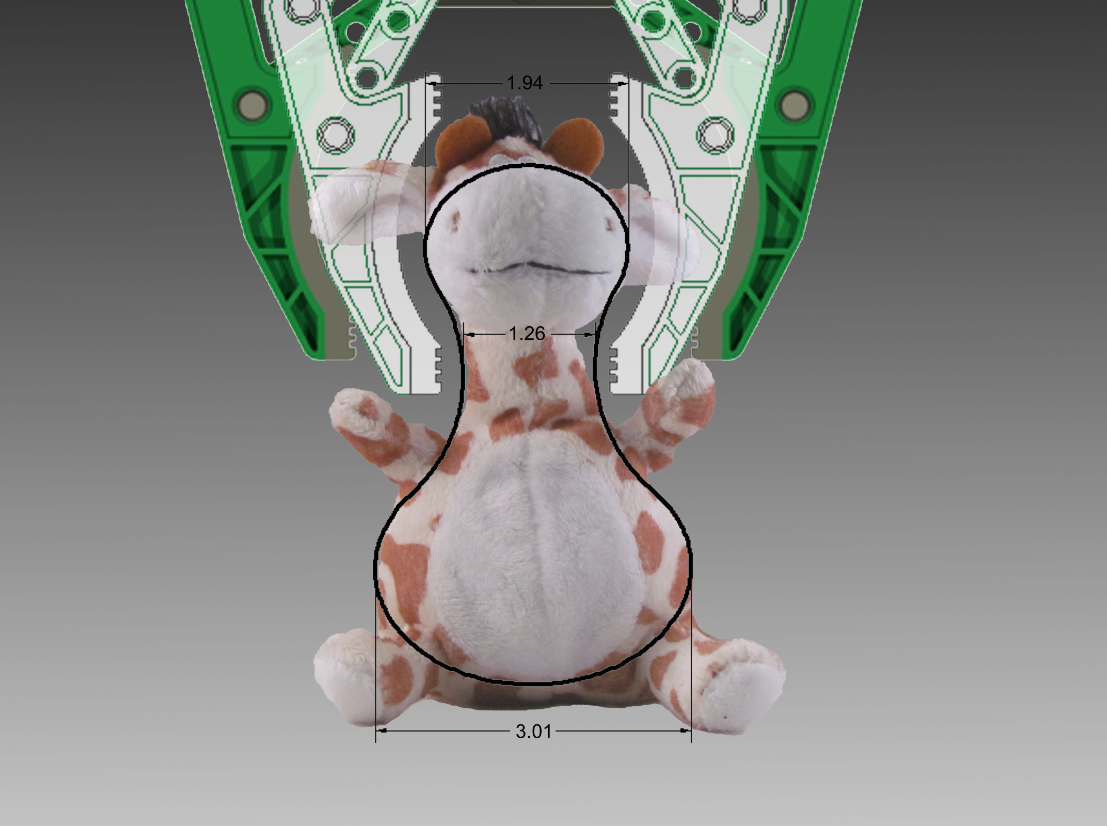 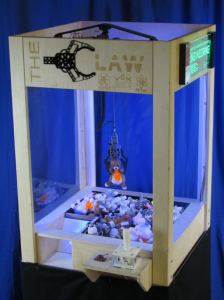 The Vex Claw Game was chosen as our project for the first semester because we could really use it to promote engineering throughout the community. It’s not only fun and exciting, but it also incorporates each of the Project Lead The Way classes that we offer at Walker Career Center. Parts from the claw game include many skills that we have learned during out time in PLTW including constructing structures with Vex parts, programming, rapid prototyping, CO2 laser cutting, and wiring. This project took us around 3 months of in school time to complete.

This is a sketch and a rendering of our original idea for the cabinet. The legs of the cabinet would be constructed from 1€x1€ angle iron. The playing area, top lid, and area where the claw machine systems are contained would be made from 3/4€inch birch ply wood. This cabinet also featured a chute where the prizes can be received. We moved away from this idea because we did not have the materials at the time and getting them would be too expensive. 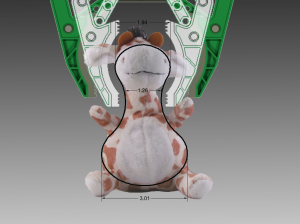 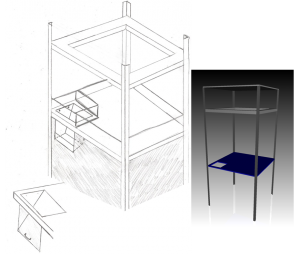 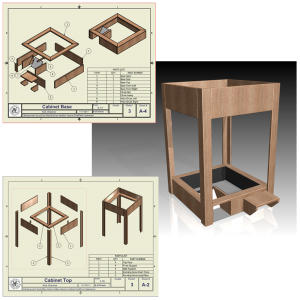 The cabinet was constructed from 3/4€ Birch plywood. There are two main sections to the cabinet, the base where the prizes are held and the top where the claw robotics main components are held. The base also has black acrylic walls to conceal any base wiring and keep the prizes within the prize area. A removable platform was also constructed for the joystick and the drop button to rest on.  Each component of the cabinet was assembled using a pocket jig and pocket screws.  The top assembly is attached to the base using 8 removable bolts. 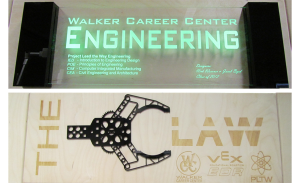 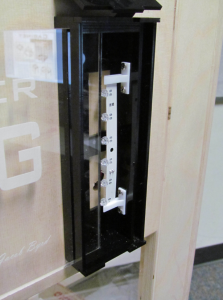 The Exterior of the claw machine also incorporates many of the classes that are offered in Project Lead The Way. The front panel of the claw machine was placed into our laser cutter and the image was burned into the wood. We also took the image of the Vex Claw and cut it out of 1/8€ acrylic. On both sides of the claw machine are two LED sign. When we took CIM, we learned to design our own personal sign very similar to these. Using Inventor, we designed a much larger sign and cut the sign out of 1/8€ acrylic. A clear piece of acrylic was also placed into our laser cutter to raster the image. 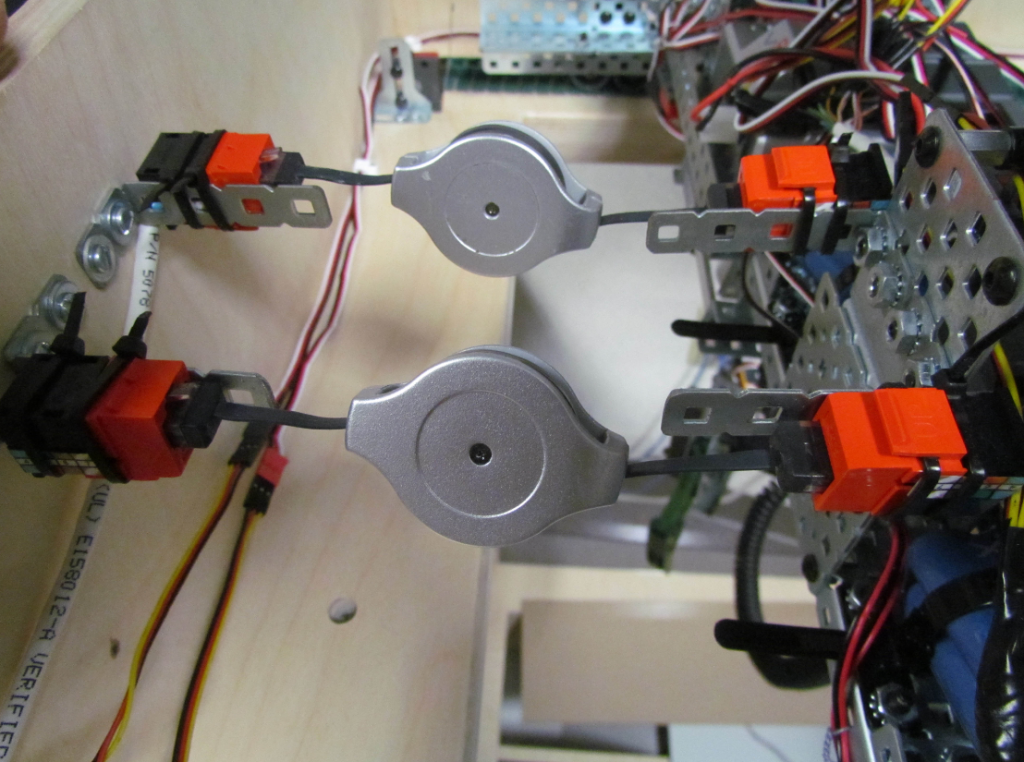 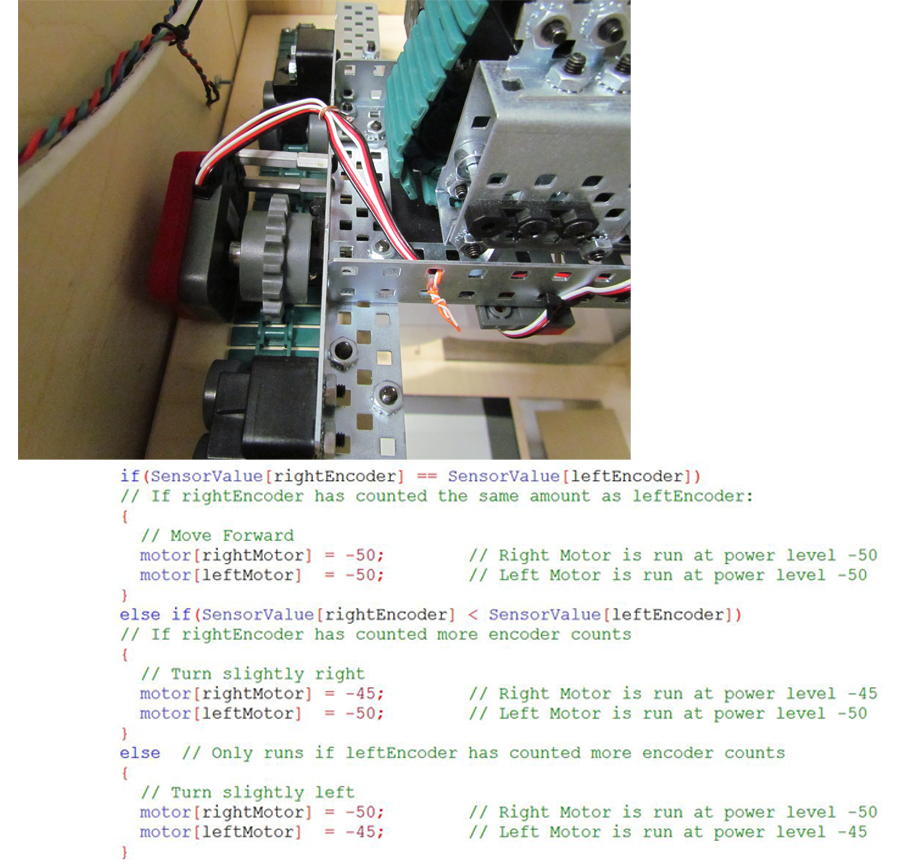 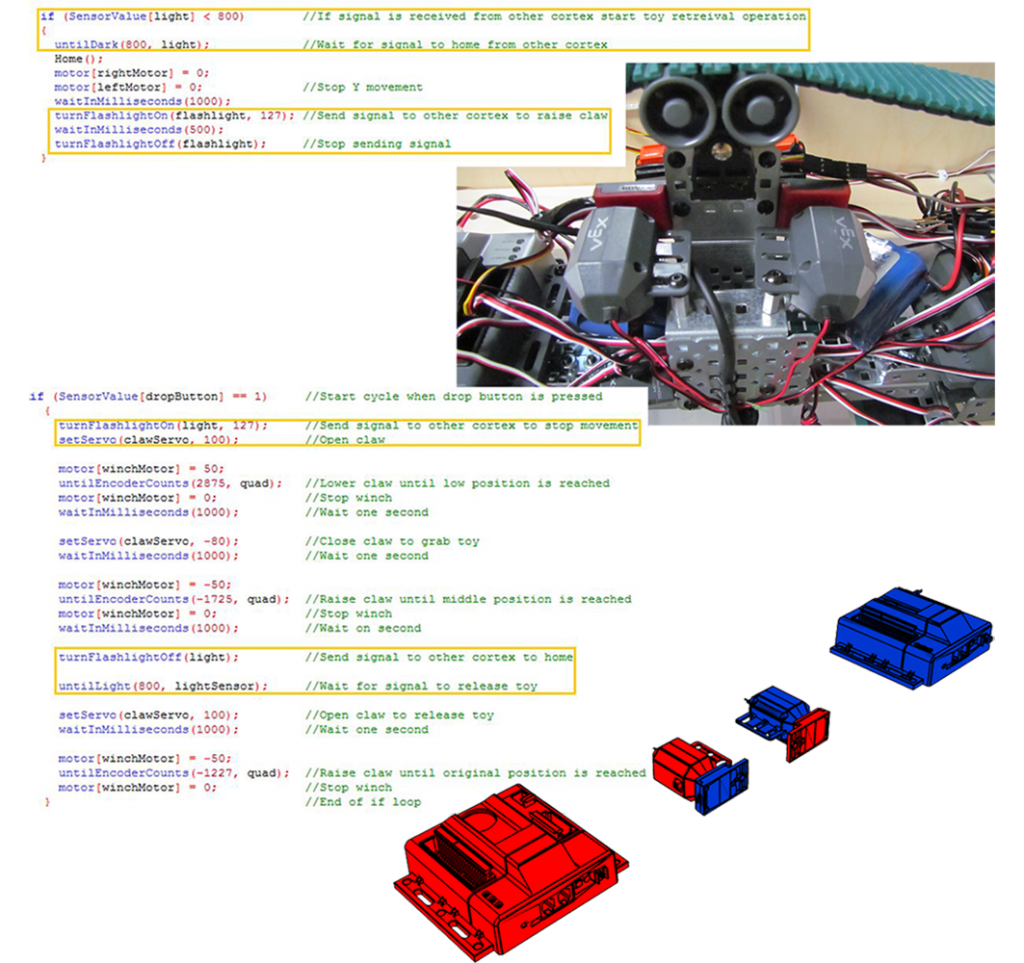 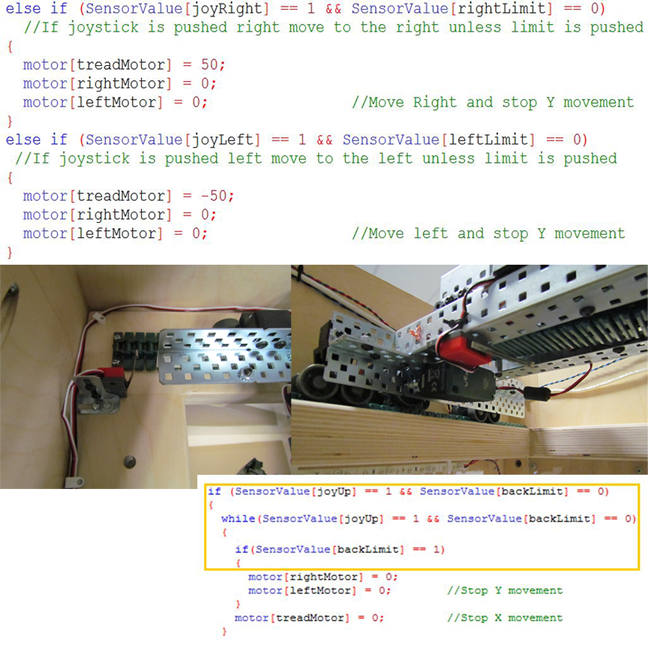 Our joystick was first designed and modeled in Autodesk Inventor and then sent to our Dimension rapid prototyping machine. The Dimension rapid prototyping machine uses a process called Additive Fuse Deposition Modeling (FDM). The machine heats and extrudes a tough ABS plastic in layers to recreate a 3D model from and stl file.  This model can then be tested for fit, form and function and revised if necessary.  Our design went through 3 separate iterations before we came upon our final design.  Microswitches were used to communicate to the VEX micro controller when the operator has moved the joystick in a direction.  The sides were cut out of acrylic on our Universal laser.  The joystick handle was made to be easily dissembled for easy cleaning or replacement. 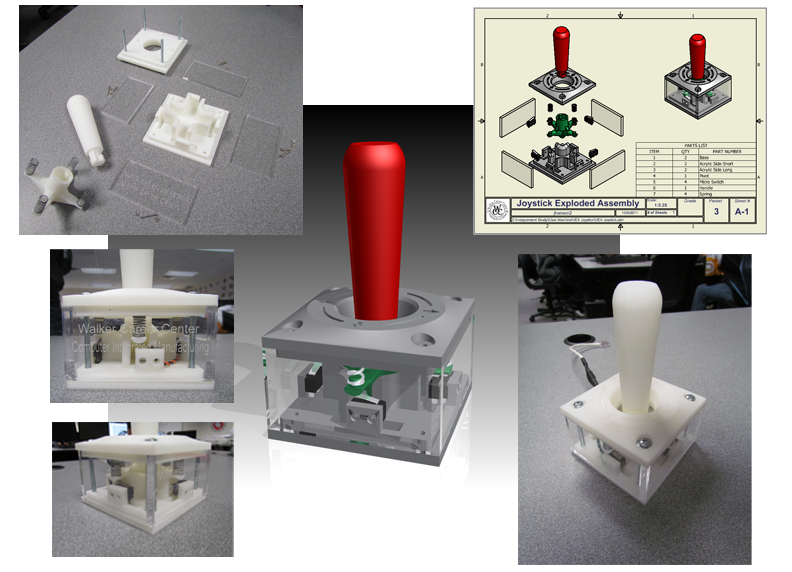 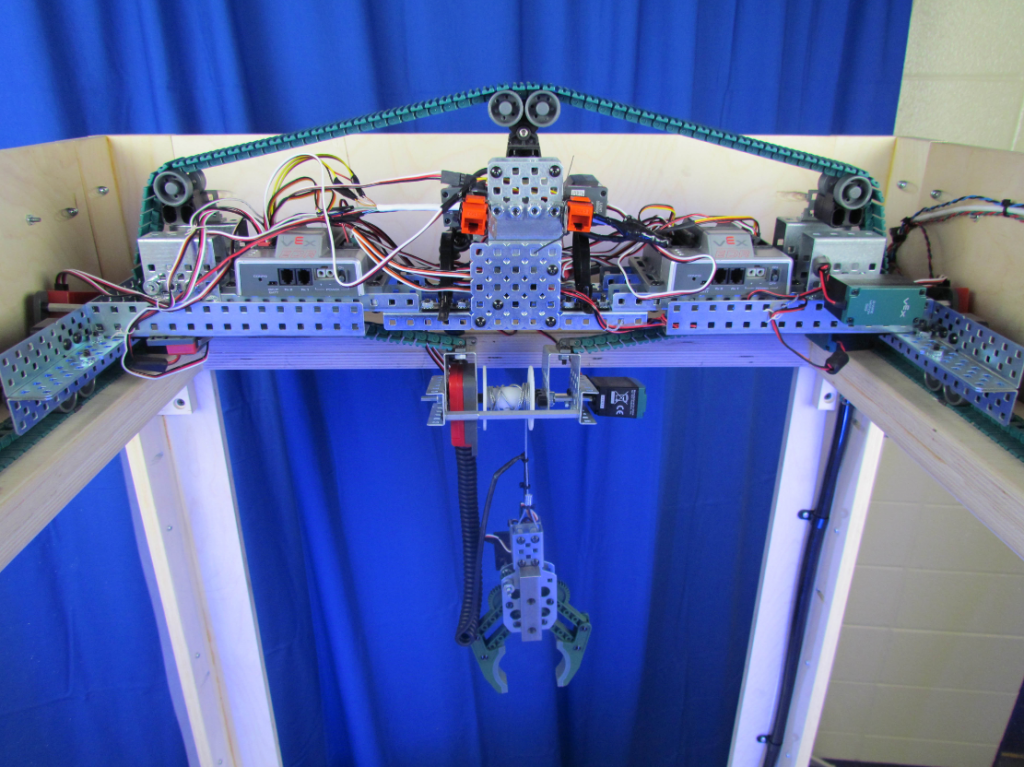 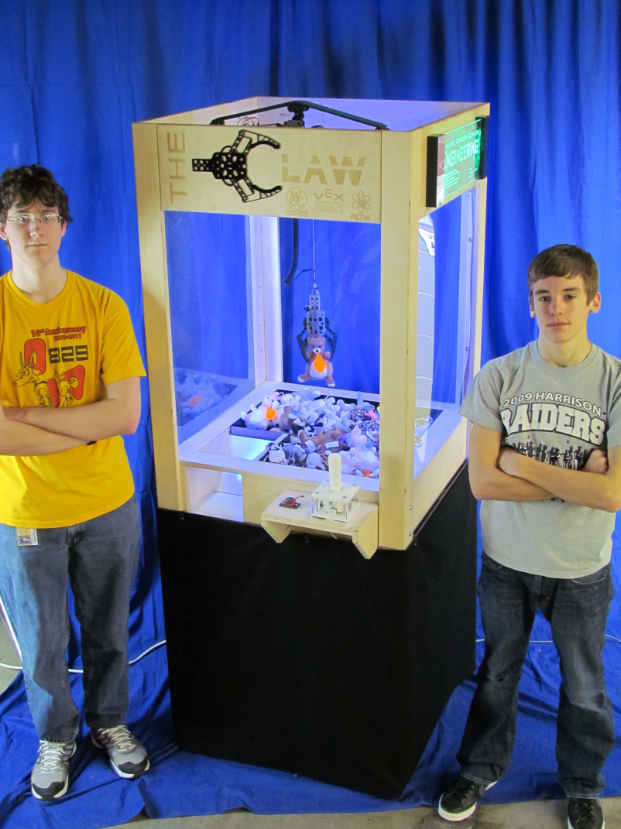